Last week I went through numbers 10-5 on my list of the top 10 episodes of Friends season 1-4. With no further ado, the rest of my favorites! 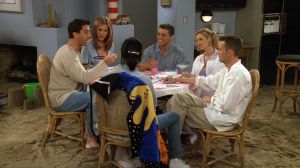 If I was in charge of titling the episodes, this would have been “The One With the Strip Happy Days Game,” but alas. In the season 3 finale, the gang goes to the beach with Phoebe, who is following a lead on a woman who may know where her father is. Ross’s new girlfriend Bonnie (Christine Taylor), who enjoys being scantily clad and talking about her sex life, joins them, much to Rachel’s chagrin. This is the first of two consecutive seasons to end with a huge Ross & Rachel cliffhanger—in the final scene, we see Ross knocking on a door belonging to one of the women, and the answer is not revealed until the season 4 premiere.

Best Quote: Chandler: “Joey will be right down. He’s just looking for his mask.”
Monica: “A swim mask?”
Chandler: “No, his gorilla mask. He wears it in the ocean to scare off the fish.”

These episodes are really sad, guys. At one point I actually yelled at the studio audience for laughing because I felt this was no laughing matter. These episodes feature Ross, whom I find to be the most unlikable of the friends, at his worst. His ridiculous levels of jealousy and paranoia over Rachel’s platonic relationship with a male coworker and lack of understanding of her desire to focus on her career lead to Rachel deciding they take a break. In a twist that was rather expertly foreshadowed for a long time, he falls into bed that very same night with the “hot girl from the copy place” the guys always mention. Thanks to a meddling Gunther, always eager to make Ross look bad in front of Rachel, she quickly finds out, and the two have a huge break-up argument while their friends listen from Monica’s bedroom, afraid to emerge. Depressing as it is, it’s all really well done, and the phrase “we were on a break!” has lived on in pop culture for a reason (but you’re wrong, Ross. You were on a break for about 10 minutes, you’re just an ass.)

Best Quote: Phoebe: (About Ross and Rachel) “They’ve been quiet for a long time.”
Joey: “Maybe she killed him.” 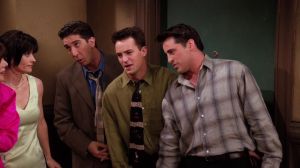 This episode is essentially just a classic farce and made me laugh so much. Monica throws a birthday party for Rachel, but when both of Rachel’s parents, who are estranged, decide to attend, the gang quickly creates parallel parties in both Monica & Rachel’s and Joey & Chandler’s apartments in an effort to keep the Greens separated. Monica’s party is obviously the more organized and therefore less fun one (there’s even a food committee), and her friends slowly abandon ship for the much more relaxed fun across the hall. The efforts to keep Rachel’s parents apart lead to some brilliant moments of physical comedy.

Best Quote: Phoebe: “They’ll take care of you next door.”
GIRL: “Is it true they have beer?”
PHOEBE: “Everything you’ve heard is true.” 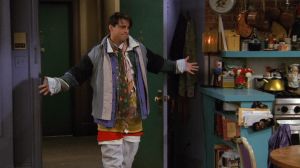 This classic is a bottle episode that takes place almost entirely in Rachel and Monica’s apartment and, most impressively, unfolds in real time. Ross has an important function at the museum and the gang is scheduled to accompany him, but an unfortunate hummus stain, Chandler & Joey’s feud over a chair, and Monica’s obsessing over an answering machine message from her ex-boyfriend Richard (oh, the 90s) holds everyone up. This episode actually stressed me out quite a bit. As one of the planners in my group of friends, I have been in Ross’s situation many times, and I frequently wanted to slap everyone on his behalf while watching this. This episode is brilliant in its simplicity—such humor is derived from just 22 minutes in the characters’ lives, and there are also more serious, touching, character development moments between Ross and Rachel after she gets upset at him for yelling at her and embarrassing her in front of their friends. While its structure is atypical, it is still very representative of everything the series has to offer.

Best Quote: Joey: “Look at me, I’m Chandler. Could I be wearing any more clothes?” 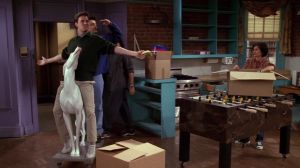 The aforementioned embryos are actually the B-story of this episode. While Phoebe’s procedure to hopefully become a surrogate for her brother and sister-in-law is obviously quite important, the humor in this episode begins with a dumb bet between Monica & Rachel and Joey & Chandler. This leads them to wonder who truly knows the others best, and in typical Geller fashion, Ross is happy to create an elaborate quiz game to determine the answer. The answers to all of the questions are hysterical (Ms. Chanandler Bong!) as is Monica’s intensely competitive nature, which leads to her raising the stakes without consulting Rachel: if the girls win, Chandler and Joey have to get rid of the chick (now a very loud and annoying rooster) and the duck; if the guys win, they get the girls’ apartment. The girls lose after being unable to identify Chandler’s job (“he’s a transpon-transpondster!”), and they glumly pack up their apartment while Joey and Chandler bask in their victory and upgrade. In the final scene, Phoebe confirms that the embryo implantation was successful and she is pregnant, and everyone temporarily puts aside their differences to have a moment of genuine happiness for her, Frank, and Alice. Once again, Friends at its best.

What do you guys think of my picks? Any I didn’t mention that rank among your favorites? Once I finish the next four seasons or so I plan to do another one of these—in fact, I already have a new all-time favorite episode thanks to season five. Any guesses?