I’ve always found there to be something magical about outdoor theater in the summer. Will Geer’s Theatricum Botanicum, situated so deep into Topanga Canyon that it’s easy to forget you’re in Los Angeles, is the enchanting outdoor venue currently home to Lynn Riggs’ 1930 play Green Grow the Lilacs, which opened last night.

While Green Grow the Lilacs enjoyed a brief Broadway run of only two months in 1931 and was nominated for the Pulitzer Prize, its true legacy is what it inspired. Rodgers and Hammerstein’s famous musical Oklahoma! is based on it, and as a result Riggs’ original work has been largely forgotten and is rarely produced today. A play featuring classic folk songs (and named after one of them), it has been called a “folk drama.” The songs, which audience members were encouraged to sing along to, do not exist to advance the plot, but rather simply because the characters feel like singing. The play is set in the then-uncharted territory now known as Oklahoma, and the sprawling, charming set, which blends seamlessly into the Topanga Canyon wilderness, and frequent musical interludes set the tone rather nicely, transporting the audience back to this seemingly simpler time.

The story is rather straightforward and, as many dramas do, revolves around a love triangle. Laurey, a farm girl, is in a fear-driven relationship with a nasty farmhand, but everything changes when charming cowhand Curley McLain enters the picture. The talented cast, led by Willow Geer as Laurey and Jeff Wiesen as Curly, slipped naturally into the dialect and feeling of the time period, drawing laughs at all the right moments in the humor-laden and often farcical story. Melora Marshall gave a standout performance as Laurey’s protective Aunt Eller, while Elizabeth Tobias was charming as the awkward Ado Annie. The ensemble, made up of over a dozen actors and singers of various ages, filled out the scenes and provided back-up during the musical interludes, with several performers also getting their own solo moments to shine. Directed by Ellen Geer, the production also featured an adorable dog, who barked perfectly on cue to great effect. 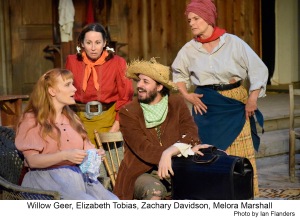 The play often felt immersive, with cast members pausing in the front row or the aisles and the audience singing along to popular folk songs such as “Skip to My Lou.” Add to that the fact that there was no true point where the stage ended and the woods began and the entire experience felt a bit like an old-timey party and sing-along on a summer evening. Considering what the play inspired, it’s fitting that the music was the highlight, even if this music is completely separate from Rodgers’ famous score. As written, the play itself is a bit clunky, particularly in act two, which I found to be strangely paced. While the play does not lack for tense moments (there are at least three very dramatic scenes), none of these moments come at times that feel natural. Act one ends before much has occurred, and a lot happens very quickly in act two. There is then quite a lull where you wonder how this could all possibly be wrapped up in a reasonable amount of time, and the solution is that it really isn’t. The play just sort of ends without a real resolution. It seems Rodgers and Hammerstein also found this problematic, as the ending of Oklahoma!, which features the same basic story, is much more definitive. Ultimately, I understood why this story is rarely produced in this form today, although I do think that if it must be, a dreamy outdoor venue such as the Theatricum Botanicum is just the place.

While I was certainly impressed by the cast and production quality, their accomplishments are even more impressive considering the Theatricum is known for producing five plays per season, which then run in repertory, many of them featuring the same actors. At certain points in the summer, a visitor to the Theatricum could see five different shows on a weekend, which is quite a feat. The rest of this summer’s docket includes Shakespeare’s As You Like It and A Midsummer Night’s Dream as well as Tracy Letts’ August: Osage County and the play version of To Kill a Mockingbird.

Green Grow the Lilacs will be performed on select Fridays, Saturdays, and Sundays through September 26th. For a detailed performance schedule and to purchase tickets, please visit the Theatricum’s website. Ticket prices range from $10 to $39.50, and patrons are encouraged to make the most of their time at the unique venue by bringing their own picnic to enjoy before or after the performance.