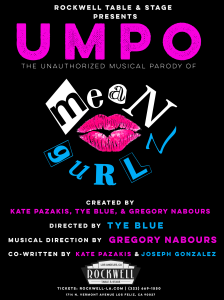 Who run the world? The Plastics. The always entertaining Unauthorized Musical Parody Of (UMPO for short) series is back at Los Feliz’s Rockwell Table & Stage with their take on Mean Gurlz—spelled just like that, which the creative team jokes, or maybe it’s not entirely a joke, is to prevent a cease and desist order. Created by Kate Pazakis, Tye Blue, and Gregory Nabours, this series caters to the millennial set with both their source material (previous iterations include Hocus Pocus, Clueless, and Cruel Intentions) and song selections, which heavily feature 90s and 2000s hits. Part musical, part dinner theater, and part just plain fun night out, Rockwell is a unique venue where you sit at tables and order drinks (including themed specialty cocktails) and food throughout the performance. The audience is encouraged to keep their phones out and document the evening, and the cast moves throughout the entire space, sometimes even taking a seat on unsuspecting audience members’ laps.

As with most shows in the UMPO series, Mean Gurlz chooses a framing device to introduce the story. This time, a narrator and self-described Mean Girls super fan (Ryan O’Connor) has recruited his friends and family to reenact the movie in his basement. While I have had mixed feelings on such narrative devices in past iterations, this one worked surprisingly well. The voiceover in the film lends itself perfectly to the use of a narrator, and it was a clever way to poke fun at the lack of sets in the space and the need for stalling during costume changes. The environment at Rockwell is so intimate you may as well actually be in someone’s basement for an impromptu performance, and Pazakis and Joseph Gonzalez used that to their advantage while writing this parody.

If I have to explain the plot of Mean Girls to you, you need to stop reading this immediately because you have far more important things to do. But, if anyone needs a refresher, the story follows Cady Heron (Bianca Giselle), an earnest teenager who attends a normal, American high school for the first time after 12 years of being homeschooled in Africa (this transition, of course, is scored by Toto’s “Africa”). She quickly falls in with the school’s trio of, you guessed it, mean girls, the Plastics, ostensibly under the guise of obtaining gossip and enacting sabotage at the encouragement of her actual friends, Damian (Andy Arena) and Janis (E.K. Dagenfield). Alas, she quickly becomes swept up in their lifestyle herself, and before she knows it, she’s well on the way to becoming cold, hard plastic.

This parody very intentionally put the Plastics front and center, to the point where Regina (Corbin Reid) felt like the main character. As I have admired in every UMPO production, the talent level was simply through the roof. Giselle’s stunning voice and earnest vibe made her a perfect Cady, and she got to shine on such songs as Britney’s “Oops, I Did it Again” and Kelly Clarkson’s “Stronger.” Reid, however, ultimately stole the show with impeccable comedic timing and some killer pipes. The image of her stuffing truffle fries into her mouth while half crying had the crowd in stitches, and she rocked “Bitch” by Meredith Brooks, the perfect anthem for Regina. She also got to sing perhaps my favorite song choice of the bunch, Adele’s “Rolling in the Deep,” at the moment when Regina decides to release the Burn Book into the world as the ultimate act of sabotage. “We could have had it all” just sums up Regina and Cady’s precarious friendship so well. Regina is of course nothing without her Plastics, and Gretchen (Natalie Lander) and Karen (Briana Cuoco) each got their own moments to shine. Lander played Gretchen’s candy cane-gram inspired meltdown, to the tune of No Doubt’s “I’m Just a Girl,” perfectly, while Cuoco hilariously sang Ace of Base’s “I Saw the Sign” as an ode to her ESPN “talents.” Katherine Tokarz was spot on as Ms. Norbury and all of the moms, and there was a particularly funny running joke about Aaron Samuels (a very charming Michael Thomas Grant) having a secret flirtation with other male characters, including the narrator.

Directed by Tye Blue, this parody contained one laugh after another. It is difficult to choose a favorite funny moment—there were the many digs at Lindsay Lohan, Janis constantly referring to Cady Heron using various bird-inspired pet names, and, memorably, a joke about how a May-December romance was the most scandalous since “your mom and Ashton”—and yes, during that line, the narrator pointed right at Rumer Willis, who was seated in the audience. If you are a fan of Mean Girls, a fan of pop music from the past couple decades, and/or a fan of some seriously first rate singing, look no further for your next LA night out- UMPO Mean Gurlz will not disappoint.

The Unauthorized Musical Parody of Mean Gurlz runs through April 15th at Rockwell Table & Stage. Performances are Thursday, Friday, and Saturday nights with an afternoon brunch show on Sundays. There is also an added performance on Tuesday, February 14th for Valentine’s Day. Tickets range from $22 to $49 and can be purchased here. Please note that Rockwell policy also requires a 2 item minimum purchase of food and/or drinks per person. Some roles are double cast and not all performers mentioned in this review will be performing at all shows. For more information, follow @umposeries on Twitter, Instagram, and Facebook.