Here’s the great thing about seeing a Disney musical—it is often impossible to wipe the smile off your face for hours, sometimes even days, afterwards. Beauty and the Beast (my personal favorite) was the first Disney Theatrical Production in 1994, and has since been followed by The Lion King (1997), Mary Poppins (2004), Tarzan (2006), The Little Mermaid (2007, and the exception to what I said about smiling, but that’s a topic for a later date), Aladdin (2011), Newsies (2011) and The Hunchback of Notre Dame (2014, although it just wrapped up its out-of-town run and will reportedly not be transferring to Broadway). The national tour of Newsies, which played over 1,000 performances on Broadway from 2012-2014, is currently carrying the banner at the Pantages in LA, and its enthusiasm and underdog spirit are completely infectious. 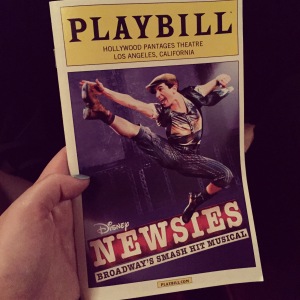 Based on the 1992 musical film of the same name, Newsies follows the true story of the 1899 newsboys strike in New York City. It has all of the components of a great stage musical: a charming underdog story, phenomenal dancing, a star-crossed love story, and enough catchy songs that you won’t be able to pick just one to sing on the way home.

The touring company is led by Dan DeLuca as Jack Kelly (the role originated by Jeremy Jordan on Broadway). Jack is a very challenging role that requires a charismatic and vocally talented actor, and DeLuca carried the show with impressive ease. Villain Joseph Pulitzer was played by Steve Blanchard, whom I actually saw as the Beast in Beauty and the Beast on Broadway in 2007. Stephanie Styles played young ingenue reporter (and Jack’s love interest) Katherine and Angela Grovey entertained as Jack’s vaudeville star friend Medda Larkin. One criticism I have of the show is that while these two women were excellent, theirs are the only female characters in the show, and as they don’t really interact this musical definitely doesn’t pass the Bechdel test. But I digress, and Katherine at least gets to sing a great act one number called “Watch What Happens,” which is one of my favorite songs from the show and, I think, an accurate and fun description of the writing process. I did feel I came into this touring production a bit spoiled. I was fortunate enough to see the Original Broadway Cast of Newsies in New York in 2012, and asking anyone to measure up to the charm and vocal stylings of Jeremy Jordan is quite a daunting task. I found I enjoyed the show just as much the second time around, though.

As fantastic as the leads are, in many ways they are almost outshined by the ensemble. The dancing and gymnastics skills these boys possess are unreal, and there were many moments of mid-song applause for their impressive backflips and pirouettes. I’m also a total sucker for a good tap dance number, and the act one opener “King of New York” certainly fits that bill. This is the rare musical that has multiple showstoppers. Along with “King of New York,” “Carrying the Banner,” “Seize the Day,” and Jack’s act one finale solo “Santa Fe” are all equally strong songs. Speaking of, it always makes me laugh that once again in a musical, Santa Fe is the city a main character dreams of and fixates on—musicals where people yearn to move to Santa Fe for 500, Alex. Is Santa Fe even that exciting of a place?

In 2012, Newsies was nominated for the Tony Award for Best Musical but lost to Once, a decision I personally agree with. Newsies is a fantastic Disney musical that definitely has more broad commercial appeal than Once, but it doesn’t really accomplish anything revolutionary in terms of pushing musical theater forward, whereas the intimate staging and unique ambiance of Once felt more fresh and less like anything I’d seen before. Also, I left Newsies beaming and Once weeping, so take from that what you will. I will say that a touring venue as vast as the Pantages is much better suited to a huge, spectacular production like Newsies. It’s the perfect touring show, and I’m happy to see it continuing to give theatergoers all over the country the opportunity to seize the day. As Medda Larkin says in the show, “where better to forget your troubles than the theater?”

Newsies runs in LA through April 19th. For more information and a link to purchase tickets, visit the Pantages website. If you’re on a budget, there is also a day-of ticket lottery to win the opportunity to purchase up to two tickets for only $20 each (cash only). This drawing is held at the theater two hours prior to every performance.

One thought on “Theater Review: Newsies at the Pantages”