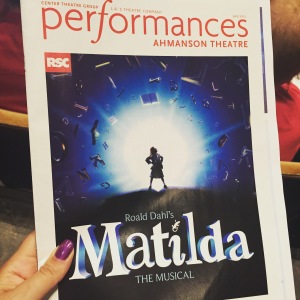 When I revisited Matilda the Musical at LA’s Ahmanson Theatre last night after previously seeing it on Broadway in early 2014, I was hoping my initial issues would seem less glaring without the incredibly high expectations I held the first time. The movie Matilda is a childhood favorite of mine, and I remember how ecstatic I was when I initially heard it was being developed into a musical. My trip to see it in New York was highly anticipated for me, and while I certainly did enjoy the show and appreciate the many things it has to offer, I couldn’t help but be a little disappointed. What frustrates me is that I do think there is a fantastic musical somewhere inside Matilda, but I do not think it is the same show the creative team has assembled. To me, it is on the verge of being something really unique and wonderful. The fact that I personally see ways to fix it that have not been utilized is a bit disheartening, both as a theater fan and as a fan of Roald Dahl’s book and of the movie.

Before I delve into my specific problems with the show as written, which I have discussed briefly but never in detail, I would first like to praise the national touring production, for which the Ahmanson is the very first stop. The cast and production value were truly first rate—in reading through the cast bios in the playbill, it was immediately apparent that this is an incredibly seasoned company, which is to be expected for such a high-profile inaugural tour. The title role, which is shared between three young actresses, was played by Mia Sinclair Jenness at the performance I attended. She was simply fantastic, commanding the stage with impressive presence and very capably singing the challenging score (she was also cute as a button). Bryce Ryness, an experienced Broadway actor whom I have seen in a variety of productions in New York over the years, gave a transformative and darkly funny performance as Miss Trunchbull, while Jennifer Blood was a sweet and likable Miss Honey. Other standouts included Cassie Silva (some Broadway fanatics may remember her top 10 finish on The Search for Elle Woods) as Mrs. Wormwood and Evan Gray as Bruce Bogtrotter.

The highs of Matilda are just as high, if not higher, than any of the great musical theater moments from the past few years. With music and lyrics by Tim Minchin, a Tony Award winning book by Dennis Kelly, and direction by Matthew Warchus, the staging (and Rob Howell’s unique, Tony winning set design) is truly imaginative and inspired. My personal favorite moment in the show (despite the fact that it has little bearing on the plot) is “When I Grow Up,” a beautiful and poignant song performed early in act 2. In addition to having incredibly relatable lyrics, the number is gorgeously staged, incorporating giant swings into the whimsical choreography. When the song is briefly reprised at the end of the show, scooters are used for a similarly charming effect. The other standout moment of the show is the 11 o’clock number “Revolting Children,” which got the audience whipped into a frenzy and is probably the score’s most catchy song. The children in the cast are so talented, and I can’t imagine how much fun they must be having performing these roles.

Unfortunately, a few exceptional numbers do not a cohesive musical make. In my opinion, the bizarre structure and pacing choices are what prevent the show from crossing the threshold between good and great. To begin, it is a rather long musical—two hours and forty minutes including intermission, with act one being particularly lengthy. A lot of early time is spent with the Wormwoods and other peripheral characters, and the act break is somewhat baffling—the show essentially just stops after one of the more forgettable musical numbers, going out on a beat involving Bruce, who while endearing is a very minor character in the grand scheme of things. Matilda’s telekinetic powers do not appear until nearly midway through act two, around the same time we learn of Miss Honey’s relationship to Miss Trunchbull. This entire central conflict is then resolved as quickly as it was introduced.

Meanwhile, an excessive amount of time is spent on a subplot of a story about an escape artist and an acrobat that Matilda tells to a librarian. While it does eventually become somewhat relevant, I feel the entire thing could be scrapped and the show would be tighter and better for it. The heart of the story of Matilda is simple and beautiful—it is about an exceptional little girl learning to embrace that she is exceptional, while defeating multiple villains who try to shame her for being so. All of the subplots distract from that core story, and while the spirit of empowerment and revolution is definitely present throughout the show, it becomes a bit muddled at times because there is just so much going on. I almost feel the creative team was perhaps a little too ambitious. I applaud originality, which the show certainly has in spades, but when you are adapting a perfectly good story there is a fine line between being creative and overly messing with something that was never broken. Give me less of the acrobat, less of the librarian, less of the Wormwoods (Mrs. Wormwood’s dance competition subplot, while funny, also takes up a significant amount of time and goes nowhere), and more of Matilda, her classmates, and Trunchbull. The show comes to life the most in the scenes at Crunchem Hall, so why do we visit it so sparingly? There is a lack of focus that caused me to leave the theater feeling the show was simultaneously too much and not enough. I will say that none of this seemed to bother the many children in the audience, all of whom seemed utterly enchanted.

My frustrations with the construction of the musical aside, everyone involved in this touring production is doing an exceptional job. If you are looking for an inspiring story with gorgeous visuals and first-rate performances, you will not be disappointed.

Matilda runs at the Ahmanson through July 12th before moving on to other cities across the country. For more information and to purchase tickets, please visit Center Theatre Group’s website.

2 thoughts on “Theater Review: Matilda at the Ahmanson”