While the setting of Picnic, William Inge’s classic play that first debuted on Broadway in 1953 and opened at North Hollywood’s Antaeus Theater last night, may be literally dated, its universal themes still ring almost unnervingly true. Works that deal with innate human needs and desires can be almost timeless—whether it’s Kansas in 1952 or Los Angeles in 2015, people can relate to constantly longing and looking for something more than what they have. This is the predicament essentially every character in the play struggles with, to varying degrees of success. 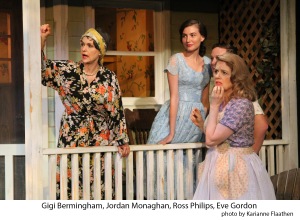 Picnic, which won the Pulitzer Prize for Drama in 1953, takes place over the course of about 24 hours on Labor Day in a small town in Kansas. Everyone is focused on preparing for a picnic in the park, until Hal, a rebellious, handsome, exotic drifter shows up in town and turns the lives of nearly everyone he encounters—particularly the women—upside down. The play has been revived on Broadway twice since its original production, most recently in 2013, and was also made into a film in 1955. 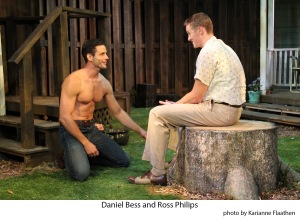 the sense of irony the play embraces. Madge, the beautiful young lady whose beauty is noted by everyone else at literally every chance they get, is perhaps the most lonely and unhappy character—which is an achievement in a play filled with deeply lonely, unhappy people. As people are wont to do, everyone wants what they can’t have. Madge wants to be smart like her sister, Millie, and Millie wants to be beautiful like her sister, Madge. Hal’s arrival is the impetus that causes everyone to realize just how unhappy they are. While some of the characters use this revelation to make a change, others sink deeper into complacency.

The Antaeus’s 49 seat theater is the perfect setting for such an intimate story, and the combination of the simple yet impressive set, sounds, lights, and even smells transports you to 1952 Kansas before the play even begins. The simplicity of the setting allowed Cameron Watson’s fine directing and the stellar cast to truly shine. 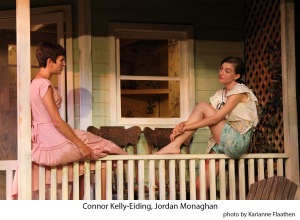 Antaeus always double casts their productions. Picnic‘s two casts are aptly named the “Stuffed Peppers” and “Deviled Eggs,” with a mixture of both forming a third “Pork Chops” cast for certain performances. The performance I attended was opening night for the “Stuffed Peppers” cast, starring Daniel Bess as Hal and Jordan Monaghan as Madge. The two had a fine chemistry that made their immediate and somewhat forbidden connection really pop, and Bess in particular gave a commanding performance as the controversial odd man out. Connor Kelly-Eiding played Millie, Madge’s scholarly, tomboyish sister who is tired of living in her sibling’s shadow. A standout in the cast, I found myself watching her often heartbreaking reactions even in the scenes she was not the focus of. Their mother, Flo, who is desperate for her daughters to avoid the mistakes she made at their age, was played by Eve Gordon, who did a great job of portraying the panic that ensued as the situation slipped further and further out of her control. The 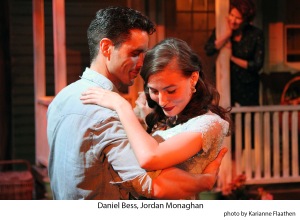 ensemble also included Kitty Swink as the family’s neighbor, Helen, who escapes her sad life of caring for her bedridden mother by hiring Hal to do some yard work—while shirtless, of course. Ross Philips was sympathetic as Alan, Madge’s traditional, wealthy boyfriend and a former fraternity brother of Hal’s. Gigi Bermingham and John DeMita played Rosemary and Howard, Flo’s schoolteacher tenant and her somewhat reluctant love interest, while Tamara Krinsky and Maureen Lee Lenker provided comic relief as Rosemary’s loud and gossipy colleagues. Rounding out the ensemble was Ben Horwitz as Bomber, the neighborhood paper boy with a knack for appearing at the most inopportune times. They all did a fantastic job, and it is impressive to think there is another entire cast capable of doing what they all accomplished. 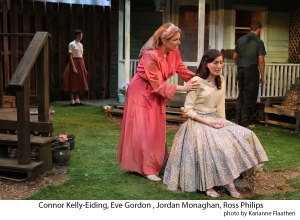 The entire story unfolds between two homes and the yard that stretches between them, which adds to the sense of isolation the characters feel. While the younger characters still dream of leaving the small town for bigger and better things one day, the older ones mostly seem resigned to their fate. The show’s poignant final image of a distraught Flo, alone in her home and sinking deeper into loneliness as others flee to escape it, poses an important question: is it easier to accept what you have at face value, even if it doesn’t make you happy, or to keep striving for something that is perhaps unattainable? While this rather bleak question will never be truly answered, the Antaeus is doing a magnificent job of trying.

Picnic runs at the Antaeus (5112 Lankershim Blvd, North Hollywood) through August 16th. Performances take place Thursday-Sunday at 8pm, with additional 2pm matinees on Saturday and Sunday. Tickets range from $30-34 depending on the day of the week, and beginning July 2nd, Thursday performances will include a post-performance talk back with the cast. To purchase tickets and for more information on which cast will be performing on which dates, visit www.antaeus.org.