Near the end of Anton Chekhov’s classic play Uncle Vanya, Annie Baker’s adaptation of which made its west coast premiere this weekend at the Anateus Theater, one of the characters exasperatedly urges the others to “do something with your lives!” I have possibly never agreed with a character more—the eight other people in the dramatic comedy spend the better part of two and a half hours going in circles, never quite accomplishing anything despite immense frustration and longing. 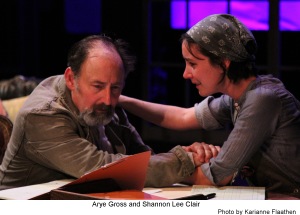 For a play originally published in 1897, Chekhov’s work is actually rather timeless. Save for a few outdated references, such as the fact that the characters come and go by horses, it is easy to imagine the events portrayed taking place today. It helps that the costumes are contemporary, and Baker’s adaptation features easy, modern language while still maintaining the core emotions of Chekov’s original text. I was excited to see Ms. Baker’s take on this classic—her outstanding play Circle Mirror Transformation has stuck with me since seeing it over five years ago. It was refreshing to see the expanded role of the female characters, who felt much more active in their own lives and storylines rather than simply being there for the men to react to. 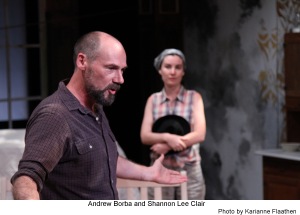 The plot set-up of Uncle Vanya is quite simple. An elderly professor, Serebryakov (Harry Groener) and his significantly younger new wife, Yelena (Rebecca Mozo) return to their country estate for the summer, causing a bit of upheaval in the lives of their family members and friends who live there. The titular Uncle Vanya (Arye Gross) is the brother of Serebryakov’s first wife and has spent years wallowing in his own misery while managing his brother-in-law’s estate. He is immediately taken with the beautiful Yelena, as is Astrov (Andrew Borba), a doctor who spends a lot of time at the family’s home. Sonya (Shannon Lee Clair), Serebryakov’s kind yet “plain” daughter, has a hopelessly unrequited crush on Astrov. Vanya’s mother, Maria (Mimi Cozzens), a poor local man, Telegin or “Waffles” for his pockmarked skin (Clay Wilcox), a nurse, Marina (Dawn Didawick), and a workman, Yefim (Paul Baird) round out the inhabitants and frequent visitors of the estate. 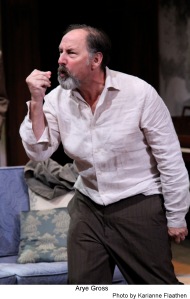 Antaeus traditionally double-casts their productions, and the cast described above is the “Vixens” cast I saw on Thursday, October 15th. While this play taught me I don’t love Chekhov, I do love the Antaeus, whose excellent Picnic remains amongst my favorite things I’ve seen in Los Angeles this year. As expected, every aspect of the production was first rate. The cast, led by a commanding, layered performance by Mr. Gross in the title role, was excellent all around, with veteran actor Groener’s quirky professor drawing the most laughs of the evening. I was particularly moved by Lee Clair’s tragic Sonya, who seemed sadly resigned to wanting everything she can’t have. The scenic and lighting design, by Michael B. Raiford and Leigh Allen respectively, set the mood perfectly, and Robin Larsen’s inspired direction tied it all together.

Now that I’ve established my utmost respect for this production, I can delve into my issues with the original work. For starters, the title is perplexing to me—while I suppose Uncle Vanya is technically the central character, the play is about much more than just him. Much like a modern play I recently saw, Appropriate by Branden Jacobs-Jenkins, I found myself amazed by how fully the characters ended up almost exactly where they began, despite many, many scenes and monologues that overstayed their welcome. Also, I feel the need to point out that, spoiler alert, a gun goes off in the second act (as performed; the third as written) that I did not feel was appropriately foreshadowed in the first. 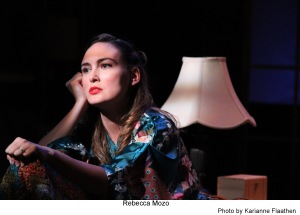 All of that being said, I must admit the same elements of human behavior that frustrated me are also what makes this work feel so timeless and honest. The themes are universal—yes, the fact that these characters are lonely, dissatisfied, mopey, and resentful of their own family makes them aggravating to watch, but is it not also what makes them real? Unfortunately, many people do spend their lives going in circles, forever bemoaning what they can’t have yet never actually doing anything to obtain it. We are just as guilty of this in 2015 as we were in 1897. Even if the characters do not take the professor’s advice, hopefully audience members will leave the theater and go do something with their lives so that we all don’t continue living up to Chekhov’s view of humanity.

Uncle Vanya runs at the Antaeus (5112 Lankershim Blvd, North Hollywood) through December 6th. Performances take place Thursday-Sunday at 8pm, with additional 2pm matinees on weekends. Tickets range from $30-34 depending on the day of the week. To purchase tickets and for more information on which cast will be performing on which dates, visit www.antaeus.org.