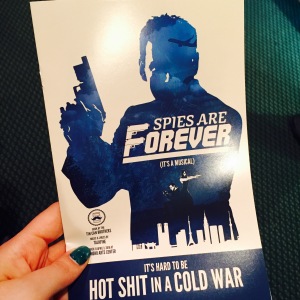 The subtitle for Spies Are Forever is “it’s a musical.” Truer words have rarely been spoken—the show is indeed a musical, and a damn fine one at that. This world premiere, made possible by a successful Kickstarter campaign that raised upwards of $58k, features a book by the Tin Can Brothers (Corey Lubowich, Joey Richter, and Brian Rosenthal) and music and lyrics by TalkFine (Clark Baxstresser and Pierce Siebers). Astute audience members may recognize several involved in the production from the viral hit A Very Potter Musical. Fans of Pigfarts will not be disappointed by this latest outing from the StarKid alums, a hilarious, smart, and surprisingly insightful musical about friendship, betrayal, and mostly spies. And not just any spies—singing, dancing spies.

Curt Mega (played by Curt Mega…yes, really) is one of the most successful spies in America, until a mission goes horribly wrong and his partner and best friend, Owen (Joey Richter), dies in front of him. Flash forward to four years later, in the height of the Cold War, as Mega attempts to come out of retirement and find redemption on a high-stakes mission involving Nazis, a bomb, and some scary technology that must be stopped. Along the way, he interacts with a variety of colorful characters. There’s his archnemesis, a rival spy known simply as The Deadliest Man Alive (Joseph Walker), and a reluctant ally, Tatiana (Mary Kate Wiles), a mysterious Russian spy with a tragic past. Tessa Netting (Broadway’s Billy Elliot) is hilarious as tech guru Barb, a lab geek who supplies Curt with all of the gadgets he needs for his spy missions while harboring a huge crush on him. Lauren Lopez (memorable as Draco in A Very Potter Musical) pulls double duty as both Mrs. Mega, Curt’s mom who supports her son’s unconventional career path but desperately wants him to find someone to settle down with, and Cynthia Houston, Mega’s aggressive, chain-smoking boss. Rounding out the cast are Al Fallick as Mega’s new “Master of Disguise” partner and Brian Rosenthal as Baron von Nazi, the absurd villain behind the master plan Mega must foil.

When I left the theater, I found myself still singing some of the songs, which is an impressive feat for a brand new musical. The style of the music is part pop/rock, part traditional musical theater, ranging from ballads to full-on production numbers. Moments such as “Doing This,” an act two duet between Curt and Tatiana, served as perfect, funny takes on typical musical theater tropes, in this case the “will they or won’t they” budding relationship number. The sultry titular song, “Spies are Forever,” was probably the strongest and most memorable song, with the choreography (also by Lauren Lopez) of production numbers “Eyes on the Prize” and “One More Shot” making them a close second.

The production value was extremely impressive. The show made excellent use of Emmy Weldon’s multi-level set, incorporating projections and effects beautifully. While some of the plot twists were telegraphed in a way that was a bit predictable, I was consistently surprised by the level of nuance with which the characters and relationships were drawn. For a truly funny comedic musical featuring a rather shocking song about how Nazis aren’t so bad that left the audience in laughter that bordered on uncomfortable, it was impressively heartfelt and well thought-out. The characters were fully realized, and Corey Lubowich’s direction was complex and impressive. This musical is quite an ambitious feat, but the cast and creative team rose to the occasion, pulling off an impressive debut production that will certainly not be the last we see from them.

According to the show’s website, there are plans to post the show to Youtube in late 2016 or early 2017. This show is good enough that more should be able to experience it, and despite the period setting, it has a fun, modern feel that will translate well to the web. Also, I can’t remember another time a new musical set up a potential sequel as organically as Spies Are Forever did—but if the title is to be believed, it makes perfect sense.

Spies Are Forever runs through April 3rd at the NoHo Arts Center in North Hollywood (11136 Magnolia Blvd). Performances are Friday and Saturday evenings at 8pm as well as Saturday and Sunday matinees at 3pm. Tickets range from $30-$35 and can be purchased here.